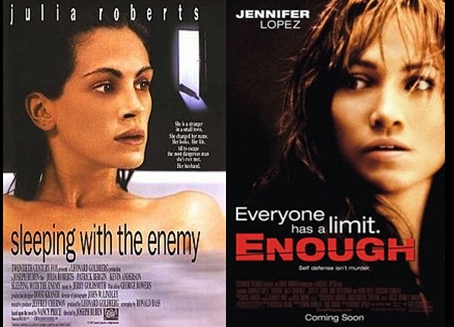 Back in the day, Julia Roberts and Jennifer Lopez actually acted. Like legit, acted. And, back in the day, they both made the same crappy movie–a decade apart. Well, not the same movie. But 2002’s Enough was definitely a rip-off of 1991’s Sleeping with the Enemy. All they did was add a kid to the mix. Thanks, Hollywood. Are there NO ORIGINAL IDEAS ANYMORE? What gives?

Okay, here’s the run-down. Julia Roberts stars in Sleeping with the Enemy fresh off of her successes in Pretty Woman and Steel Magnolias for which is received Oscar nominations for both films respectively. According to the summary, “A young woman fakes her own death in an attempt to escape her nightmarish marriage, but discovers it is impossible to elude her controlling husband.”–via IMDB.

Jennifer Lopez, on the other hand, is the driving force behind Enough; coming off of such hits as Tarsem’s The Cell, Oliver Stone’s U Turn & c0-starring with George Clooney in Out of Sight. According to its summary, “On the run from an abusive husband, a young mother begins to train herself to fight back.”–via IMDB.

Hmmm…something’s fishy. I really want to know who green-lit Enough because it’s essentially the same damn movie. And I paid to see it in the theater. I was 18 and going through a “JLo is a good actress” phase. She’s still a good actress, but she let the fame get to her head. Anyways… Is a decade too long to ask for your money back? Here’s the sitch: Wife is abused by her husband. Wife escapes husband. Husband searches for wife. Husband finds wife. Wife fights back. Wife kills husband. The end. In BOTH movies.

Need proof? Here are the trailers:

The voice-overs for the trailers are nearly identical. I rest my case.

The most prominent differences between Enough and Sleeping with the Enemy are the fact that one has a kid, one doesn’t; Enough has a fight coach, SwtE has a love interest. But BOTH are being pursued by their vicious husbands and take revenge. Grrr. GIRL POWER!

I gotta give the creepy husbands some credit though. It takes a strong actor to play the stereotypical abusive husband and do it differently. Although, Patrick Bergin (SwtE) and Billy Campbell (Enough) both play characters who are excessively wealthy. The difference comes in the snake-oil salesman approach with which Patrick Bergin plays Martin. It’s truly an over-the-top performance. That doesn’t help Julia Roberts performance, which is actually quite good in this movie. Again, Billy Campbell has the suave businessman approach to his character as well, but JLo just seems to be recycling what every other actress who plays an abused wife does–until the end. Then she kicks some serious ass. Too bad the exciting part is only at the end with Enough.

I also think that the writer was trying to play the sympathy card with JLo’s plight because she had a kid. You add a kid to mix and suddenly, it’s the ultimate revenge movie. I noticed this with Ashley Judd’s performance in Double Jeopardy as well.  If hell hath no fury like a woman scorned, then I don’t even want to imagine what that’s like when a child is involved. Apparently it includes massive amounts of strength training and target practice. Julia Roberts, I’m sorry to say, missed out on target practice. Probably because her storyline lacked the “I’m a mother protecting my offspring” element.

If you want to see Julia Roberts rebuild her life after faking her death, or JLo kicking some serious ass, watch these movies. For the time being, Sleeping with the Enemy is available to stream on Netflix. Just for the hell of it, put Enough in your queue and when you get it, just fast forward to the last scene.

Oh, and as a side note, WHY does every movie that has someone “building a new life” include the painting of room? My guess is art therapy for the actors so they can handle  the stress of being in a bad movie.