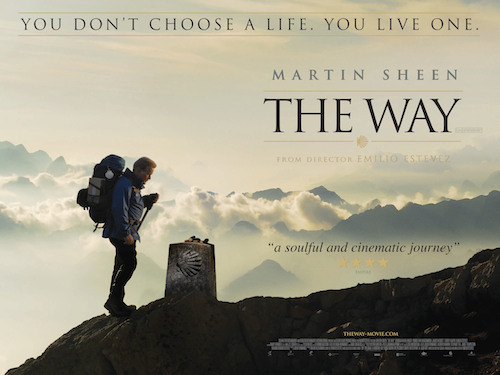 Other than the fact that I think Emilio Estevez is awesome because he just so happens to follow me on Twitter, he is also one of my favorite directors. More people know him from his work as an actor (The Breakfast Club, Mighty Ducks Trilogy to name a few) or his famous family (Charlie Sheen is his brother and his father, Martin Sheen also stars in The Way.) As a director, though, he shines. Much like this year’s man of the moment, Ben Affleck, Emilio directs and co-stars in nearly all of the movies he has directed (Wisdom, Men at Work, The War at Home, Rated X, Bobby and The Way.) It’s not a bad thing to do, especially if it is done well. In both the case of Ben Affleck and Emilio Estevez, they pull off such feats quite remarkably well.

What’s most impressive other than the obvious fact that Emilio Estevez directed his own father in the film, is the literal journey they took during the filming. The short summary of events, according to IMDB is, “A father heads overseas to recover the body of his estranged son who died while traveling the “El camino de Santiago,” and decides to take the pilgrimage himself.”  According to trivia on IMDB as well, filming took 40 days which, as a Catholic, I find kind of funny seeing as the Lenten season lasts 40 days. But again, my sense of humor tends to be sort of warped seeing as I went to Catholic school my whole life (even college.) Anyways, Estevez does a brilliant job at capturing the emotion of the story and the beauty of the locations within the film.

The thing that I find most interesting about the story of The Way, is the premise seems like such a simple one. Yet, the complexities of human nature and relationships that develop throughout the film stand out as one of the highlights. Much like this year’s Argo, at the heart of the film, it’s about the people in the story. With The Way, there are no special effects and there is virtually no budget. It’s low budget, indie film making at it’s best, “Filmed with a small crew of fifty people and a couple of cameras for filming. No trailers were used, and, as Estevez jokingly remarked, neither was a director’s chair.”

The fact that Martin Sheen is one of the most remarkable actors of the past 50 years bears repeating. He’s fantastic. He’s Method. He truly takes what his current circumstances are and infuses them into his roles. As the grieving father, Tom, Sheen takes the same journey (literally) that his character is taking. In some ways, I think the physical journey helped the actors portray their characters in a more truthful light. Since the moment I saw this film, I loved it. I have to apologize for not summarizing or going more in depth about the film. That being said, everyone takes a different journey. Someone might have a different view of the film than myself and it might effect them differently than it did me. I think it’s one of the those films that makes you turn inward and examine yourself, your life and your relationships. It’s fantastic and I think more people need to see it. For what it’s worth, it’s available for both rental and instant stream on Netflix. The Way is a film that, whatever your religious beliefs, spiritual or not, it’s message of love and the power of human interaction is truly amazing. See it. Now. And Emilio Estevez, if you’re reading this, I just want to let you know that you and your father are on my list of people I want to work with one day.