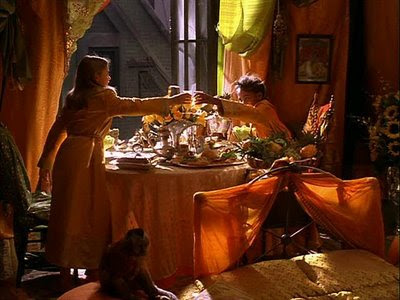 There are cookbooks dedicated to sharing recipes from various films and television shows such as Downton Abbey, Game of Thrones, and Harry Potter (just to name a few.) It’s probably one of the most basic and necessary human needs other than breathing. Food, and the act of consuming it, is probably one of the most prevalent and consistent things seen in nearly every film, television show and even play. Yet, it’s one of the most difficult things to do while acting. I just did  a play this past December where my character ate for nearly the entire time that they were onstage. The challenge for me as an actor, was to time it out just right so that I was able to say my lines at the right moments, and eat at the same time. Believe me, in everyday life, the last thing you’re thinking about is whether or not you’re going to be the next one to say something, but having too much food stuffed in your face at the wrong moment on stage or film can be awkward . In dinner scenes, especially on film, you may notice that no one actually eats. And if they do, it’s little nibbles and tiny bites. Why? Because they have a scene to do and lines to say. They also have to do take after take, which means eating…and eating. Or does it?

There are several tricks that we as actors implore to make sure that we don’t gain a massive amount of weight or get massively ill during the course of filming. Often, there might be a cup or a napkin you can spit into in between each take. But sometimes, you really might be eating continuously. This can be a challenge for any actor, especially the kid actor. Kids love to eat. And as children, their eyes might be too big for their stomachs or they might not realize one crucial factor. They’ll have more than one take. They might have five, six or heck, even ten takes to do. This is where the tricks of the trade come into play.

George Clooney tells a great anecdote during his Inside the Actors Studio interview about filming a scene with Amara Miller, who played his youngest daughter Scottie, in The Descendants. It was Amara’s film debut, and as such, she was probably not thinking about the fact that she would have to do more than one take of a scene where she is having lunch with George Clooney and eating ice cream. And, George didn’t actually warn her that eating all that ice cream, take after take, would make her sick. So, at the beginning, she was scarfing down bowls of ice cream. One take, two takes, three takes…and by take five or six, she began to feel ill. Poor  kid. She should have paced herself. Maybe taken a few spoonfuls during each take. But that wouldn’t have been realistic. Kids love ice cream.
The story that George Clooney reveals is all too common with actors and food. Oftentimes, even as adults, we might get ahead of ourselves and make ourselves sick of whatever we’re eating. I did a film once where I was eating pizza, and I would just take little bites throughout the scene. One slice lasted me three takes. By the end of the work day though, I didn’t want to eat pizza for at least a month.

Yet, on film, and as an audience member, we might just crave what the actor is having to eat onscreen. And, audience members are the first to notice continuity flaws in film and television as well. A lot of the time, those flaws deal with food. In Pretty Woman, for example, during the breakfast scene, Julia Roberts is eating a pancake. Then, that pancake turns to a croissant in the next shot we see of her. Maybe they did the scene two different days, but whoever was in charge of continuity got the food wrong. It’s minor, and now part of film history. But, as an actor, I always try to make sure that I remember what I’m eating, what hand I have things in, and even how I’m wearing something. Someone out there will notice if it’s wrong, and they’ll blog about it.

There are countless scenes that incorporate food and to make the most of the different sub-categories of Food On Film, I’ll be talking about everything from dinner scenes to food fights and everything in between.

As a side note, one of my favorite local hangouts in my neighborhood is a local coffee shop called Darling Coffee. It’s run by two of the nicest people you could ever meet, and the coffee, along with the baked goods, rival any place in Manhattan. You’re getting top quality food and beverage in an atmosphere that’s friendly and creative. It’s my favorite place to go in my area. It’s my version of Central Perk from Friends I guess. If you’re ever in Inwood, at the tip of Manhattan, go there. It’s fantastic. And I’m addicted to their Campfire Cookies.

One thought on “Food on Film: The Joys & Challenges of Acting and Eating at the Same Time”