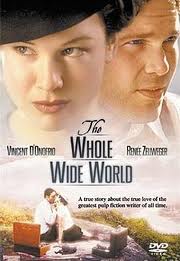 Long before she won an Oscar for Cold Mountain and thanked Vincent D’Onofrio in her acceptance speech, Renée Zellweger worked with him on a little independent movie called The Whole Wide World (1996.) It was the movie she made right before her breakout role in Jerry McGuire and it was because Cameron Crowe saw this film that she eventually won the role that made her a star. Both D’Onofrio & Zellweger won acting awards  at several film festivals for their portrayals of writers Novalyne Price (Ellis) and Robert E. Howard.

The movie, The Whole Wide World (1996), was based on a  pair of memoirs written by Novalyne Price Ellis when she was 78 about her relationship with pulp fiction writer Robert E. Howard, famous for creating the character of Conan the Barbarian. The two apparently had a tumultuous relationship until Howard’s suicide at the age of 30 in 1936. The movie tells the story of this relationship.  Novalyne Price Ellis didn’t become successful for her writing until she was nearly 80. Additionally, Robert E. Howard didn’t become famous for creating Conan until after his death.


Both D’Onofrio and Zellweger are fantastic in their roles as Howard and Price. Zellweger even went on to portray other writers in her films as well: Beatrix Potter had Peter Rabbit, Bridget Jones had her diary. Maybe Zellweger’s degree in English from the University of Texas has lent a hand to her playing writers so well. D’Onofrio, on the other hand, possesses the brute force of nature and striking resemblance to Robert E. Howard to bring him back to life again. The film itself was ultra-low budget, shot in Texas (Zellweger’s home state) and directed by Dan Ireland (who went on to direct Jessica Chastain in her film debut, Jolene.)

Due to the fact that it’s so simple, makes it one of my favorite films. Not only that, but films about writers can be sort of boring simply due to the fact that writing is a very solitary activity. The creative process of writing is a whole lot different than that of an actor. So, when an actor is able to portray the inner workings of a writer’s process on screen, it’s quite an accomplishment. Nicole Kidman won her Oscar for playing writer, Virginia Woolf and Philip Seymour Hoffman won his for playing Truman Capote. But it’s funny that a little film like The Whole Wide World led to a big break, that led to more movies, that led to an Oscar win for playing someone who was illiterate. And in the end, it came full circle because she didn’t forget how far she had come, and thanked the man who she credits with teaching her how to act. And if not for the movie itself, see it for Vincent D’Onofrio’s fake mustache. It’s quite a sight to see.