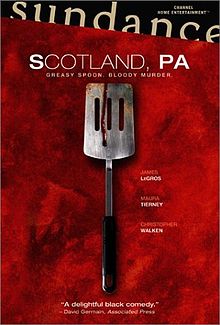 I first came across Scotland, PA in college. I was into Shakespeare, and just for fun, I decided to see what film adaptations we had in the library. This one caught my eye because it wasn’t actually using Shakespeare’s original play for the dialogue, but updated it. It was campy, interesting and just as intriguing as the original, Macbeth.

From Netflix:Scotland, PA takes Shakespeare’s “Macbeth” someplace it’s never been: 1970s white-trash America. James LeGros and Maura Tierney are Joe and Pat McBeth, a couple stuck in dead-end fast-food jobs. When they decide to murder their boss and take over the burger joint, their foul plot is sure to hit some snags. Before long, Lt. McDuff (Christopher Walken) begins an investigation that leads him straight to the heart of a dysfunctional fast-food fantasy.

Who wouldn’t want to see Lady Macbeth’s crazy, “Out Damned Spot” scene done in a pharmacy? IT IS! And it’s fantastic. Andy Dick, Amy Smart, and Timothy “Speed” Levitch play hippies (witches) and Christopher Walken plays one hell of a Macduff. It’s a fantastic take on the classic play and it is as entertaining as the original, with a 70s flare! Personally, I love when writers update Shakespeare. I think it shows imagination, and I honestly think that Shakespeare himself would find it just as amusing, if not more. It’s available on Netflix, and I believe you might even be able to watch it for free on YouTube. Do yourself a favor, check it out. It’s amazing.