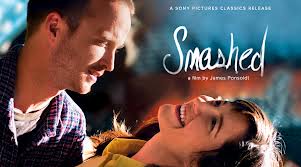 The thing with being drunk on film is that it’s not about playing “drunk.” It is about the need to conceal the fact that your character is drunk. When we cry, we often try to hold it back; and when we’re drunk, we try to appear as normal as possible. Sometimes, people forget that fact, and try to play the fact that a character is drunk.  Case in point: In one of her earliest films, Mystic Pizza (1988,) Julia Roberts and friends steal a six pack of beer. After about ONE sip, Roberts is acting drunk. There is also the stereotypical “funny drunk” that many people seem to play. Sixteen Candles(1984) and any teen movie seem to utilize this method of showing  someone as drunk.

Then, there are the movies where alcohol is the main focal point of the character’s life.  The film Smashed (2012) deals with drinking on film as its  focal point: A married couple whose bond is built on a mutual love of alcohol gets their relationship put to the test when the wife decides to get sober.

It’s a great film that deals with the specific problem of alcoholism and being drunk. It doesn’t glamorize it, or make it appealing or funny. It tells it how it really is. Troubling, sad, and fixable.It’s a film worth seeing.  It features Oscar winner Octavia Spencer, Husband and wife duo Nick Offerman & Megan Mullally, and great performances.

For more information on dealing with alcoholism if needed, go to Alcoholics Anonymous.