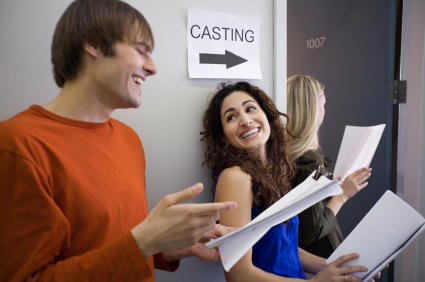 Auditioning is stressful for both the actors in front of the table, and those who are trying to make the decisions behind it. I rarely go into auditions calmly, and if I am calm, it worries me. Some people are really really good at auditioning, but not necessarily acting. And most actors I know say that they are really bad at auditioning. They are also some of the best actors I have worked with.  Casting directors have a job to do and we as actors need to realize that fact. They have a limited amount of time to pick from the pool of actors who audition for them, and narrow that down to the final few until they have a cast. It doesn’t matter what the project is. It could range from a commercial, to a film or television series, to a stage production. Casting directors HAVE to find a cast. Wow. Talk about stress.

Sometimes, I have walked into a room and felt the disappointment in the air, because I come to the conclusion automatically, that I know I’m not who they are looking for. I can see it on their faces. I can hear it in their tone of voice. It’s as if they are saying, “Why is she here?” “Why is she wasting our time?” Apparently, I’ve heard, that until the character walks into the room, they are unconvinced that they are going to find anyone to fill a particular part. Sometimes, I’m really confident when I go into an audition. But, to be honest, I size up my “competition” before I go in the room and end up psyching myself out because all these things run through my mind like, “I’m not thin/pretty/normal enough” or “I seem really out of place.” I have two minutes to “impress” these people behind the table, but sometimes I can sense, that even before I’ve opened my mouth to speak, I’ve been tossed aside.

It’s odd that in the “real world” a job interview takes into consideration your previous experience, skill set, and whether or not you’re truly qualified for the job. In the acting world, it can come down to simply, “I didn’t fit the character description.” I’ve come to the conclusion that the pressure that the casting people feel due to the time crunch, and the stress that I bring on myself about the audition, just makes it an all around stressful situation.

Here’s what I am planning to do to curb my stresses. I’ve been asking myself questions to calm myself down. Michael McKean has a great quote about auditioning. He states, “What’s the worst that can happen? They don’t give you the job? Guess what: You already don’t have the job. The worst has happened! Pressure’s off, so have fun. The main reason we wanted to do this is that it look like it would be fun, right?” Right. I have to remember what made me enjoy acting in the first place. That thing that made the fire in my stomach ignite, is that acting is creative. It’s fun. It should never stop being fun. But we as actors have been so consumed with “nailing our audition” that we have lost sight of why we became actors in the first place. I want to serve the material. I have been asking, “How can I serve your project?” in my mind before an audition, rather than “Are you going to like me?” How can I best help out the people behind the table? Well, the easy answer is, I can be what they want. Yet, of all the audition success stories, they seem to include one key point: The actors were showing who they were. They were showing their best qualities. Sometimes, you just have to bring yourself to your work, and utilize the qualities you already possess. So in the end, we’re not really “acting” at all. We’re us. And that’s okay. I’m going to showcase the best of myself. Take it or leave it. So what if I’m not thin/pretty/normal enough? I’m me. Boom. Stressful situation avoided. Bring on the fun!