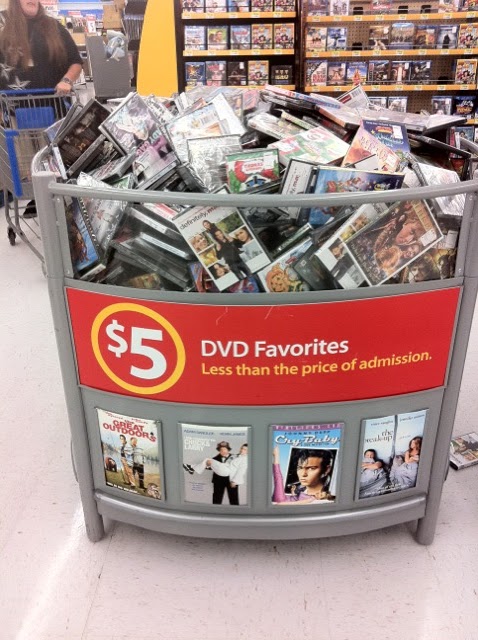 What stars Oscar-winner Adrien Brody, David Moscow (famous for playing David Jacobs in Disney’s Newsies,) future Mentalist star Simon Baker, and former Cosby kid, Malcolm-Jamal Warner? Well, that would be a movie I found in the bargain bin at Walmart back when I was in college called Restaurant (1998.) In fact, Adrien Brody received an Independent Spirit Award nomination for his role in the film about the lives of struggling actors working in a restaurant. It’s actually a really decent film, and I was surprised to find that a film of good quality could end up in the bargain bin.

Julia Roberts has even had movies end up in the bargain bin, one of them being her film debut in Satisfaction. Roberts co-starred alongside Liam Neeson, and Family Ties star, Justine Bateman (whom the film was geared around as a “star vehicle.” ) In the end, it was Julia Roberts who became the household name, but not because of this film. It’s cheesy, but it’s also really interesting as an actor to see how stars, as we know them today, have evolved and grown since their earlier work. I previously blogged about the movie Deeply, starring Kirsten Dunst. I also found that movie in the bargain bin.

I’ve found television series that I used to love as a kid, B-movies of my favorite actors, and some classic films as well. Some stuff is really really bad, other stuff is really good. But the bargain bin should never be neglected. Target has some great deals on really great movies and they usually start at $5. I cannot tell you how great it is to be able to afford some of my favorite movies, and discover new ones too.  One of my acting teachers has always told me to watch bad acting, watch good acting, observe your fellow actors. From an audience’s stand-point, a movie is in the bargain bin because it’s “bad.”From my acting stand-point, I feel bad that others perceive bargain bin movies as awful.

Early on in Julia Roberts career, when she made her film debut in my future bargain bin purchase with the movie Satisfaction, it was more than likely, the biggest break she had in her career at that point. She was making her film debut with Liam Neeson who had already established himself in some fashion, and the “it girl,”  Justine Bateman who was starring on Family Ties. If I were Julia Roberts, I’d be freaking out if I got a part like that with someone who was established on a well-known television series.  Who knows how she feels about that project now.  The way I see it, all projects, whether blockbusters or not, are learning experiences that we can grow from as actors. Plus, when you’re on a budget and you’re a struggling actor, the bargain bin can be awesome.