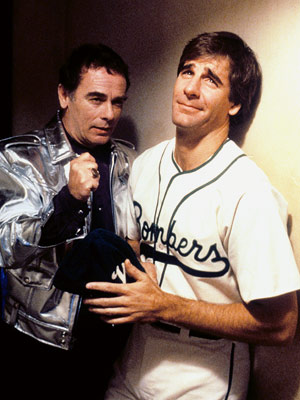 Quantum Leap is an American television series that was broadcast on NBC from March 26, 1989 to May 5, 1993, for a total of five seasons. The series was created by Donald Bellisario, and starred Scott Bakula as Dr. Sam Beckett, a quantum physicist from the near future who becomes lost in time following a time travel experiment, temporarily taking the places of other people to “put right what once went wrong”. Dean Stockwell co-starred as Al Calavicci, Sam’s womanizing, cigar-smoking sidekick and best friend, who appeared as a hologram that only Sam, animals, young children, and the mentally ill could see and hear. The series featured a mix of comedy, drama and melodrama, social commentary, nostalgia, and science fiction, which won it a broad range of fans. One of its trademarks is that at the end of each episode, Sam “leaps” into the setting for the next episode, usually uttering a dismayed “Oh, boy!”–Wikipedia.com

There’s one thing Wikipedia left out. It’s one of the greatest television series to incorporate basic acting exercises. When actors were little kids, they probably played “make believe” like all the other children. What we actors didn’t realize at the time was, we were actually doing some of the most basic acting exercises. We’d play the teacher, the mother, even the animal. One of the theater/improv games I still enjoy is “freeze” where a performer is able to tag anyone out of the scene and start a new scene. Essentially, that’s what Quantum Leap was as a series. The main character is often disoriented and needs time to re-gain their footing and adjust accordingly to the circumstances around him. Scott Bakula played everything from a young kid, to an animal, even a different gender and race without the use of special effects or offensive makeup. He played the characters as they were, all of the time, we as an audience were seeing him as he actually looked. The most basic of acting games was now utilized in a complex television series.

What I love is that Bakula was able to play all these different characters while maintaining is primary character of Sam. However, the most interesting parts may just come from the supporting cast around him. The actors who had to act alongside Bakula and treat him as if he were a kid, woman, animal or gangster. It’s amazing to look at the series from an acting perspective because it reminds me of scene study classes. Part of me wishes that all series were as amazing as this one. If you’re an actor, watch it. It’s a great learning tool and a wonderful reminder how much fun pretending is.