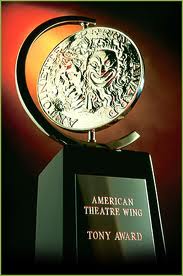 The nominations for the 67th Annual Tony Awards were announced this morning by Broadway veterans Sutton Foster (ABC Family’s Bunheads) and Jessie Tyler Ferguson (ABC’s Modern Family.) Among the nominees are your standard theater performers, who have yet to make themselves known to a wider audience, but there are a lot of familiar faces from television and film as well. The late Nora Ephron received a posthumous nomination for penning the play, Lucky Guy, which stars fellow nominee Tom Hanks (who starred in Ephron’s films Sleepless in Seattle & You’ve Got Mail.) Broadway and film vets Nathan Lane, Tracy Letts, David Hyde Pierce, and Tom Sturridge vie for top honors along with Hanks in the Best Performance by an Actor in a Leading Role in a Play category. In my humble opinion, Alan Cumming was snubbed for his tour de force performance in Macbeth.

For Best Performance by an Actress in a Leading Role in a Play, television and film veterans fill a category where it’s clear they all started in the theater. It includes the stellar works of Laurie Metcalf (The Other Place) Amy Morton (Who’s Afraid of Virginia Woolf?) Kristine Nielsen (Vanya and Sonia and Masha and Spike) and Cicely Tyson (A Trip to Bountiful.) The thing that I find most interesting about this category is the fact that Jessica Chastain was snubbed for her Broadway debut in The Heiress.

The most fun however, will come with the featured actors in plays (both male and female categories.) For the male category, it includes: Danny Burstein, Golden Boy, Richard Kind, The Big Knife, Billy Magnussen, Vanya and Sonia and Masha and Spike, Tony Shalhoub, Golden Boy and Courtney B. Vance, Lucky Guy.  They are all theater veterans and well-known in television and film as well. For the female category it’s the battle of the Judiths with both Judith Light and Judith Ivey getting nominations. Carrie Coon, Who’s Afraid of Virginia Woolf?, Shalita Grant, Vanya and Sonia and Masha and Spike, Judith Ivey, The Heiress, Judith Light, The Assembled Parties and Condola Rashad, The Trip to Bountiful.

It will be interesting to see who wins in these categories considering most of them do theater, film and television. For a complete list of nominations you can go here.