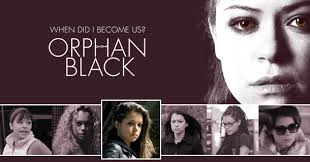 BBC America has always pushed the envelope when it comes to programming. From imports like Doctor Who and Sherlock to its original content like Copper,  it has some of the best shows on television. The new show Orphan Black which premiered in March of this year, is an actor’s dream job. Star Tatiana Maslany plays seven, count’em, SEVEN DIFFERENT characters. Much of the time, she is acting against herself. Her approach is reminiscent of the chameleon-like qualities of Meryl Streep, with the visceral intuitiveness of Angelina Jolie. Here’s the catch though. Her training is heavily improv based. Acting throughout her native Canada as a child, she became involved with an improv troupe and acted with them for ten years. As an actor, I think the series, especially the first season, is a master class for other actors. Watching the show makes me want to study more and work harder at my craft. Honestly, it makes me want to hone my skills as an actor and I don’t think any television show has done that for me.  Tatiana Maslany is definitely an actor’s actor. The characters are so vastly different that people may forget that they are watching the same person act. It’s amazing, and honestly, I can’t talk much about details without giving away the plot. But check out the clips below: