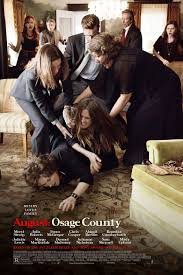 The good thing about being in the Screen Actors Guild is that we often get to see films before they are released into theaters to the general public. Last night I had the pleasure of viewing Alexander Payne’s Nebraska (separate review coming) and the adaptation of Tracy Lett’s 2008 Pulitzer Prize and Tony winning play, August: Osage County in the comfort of my own home. I loved the movie, I really did. However, I think that both the play version and the movie version are two separate entities. Oftentimes, I kept finding myself comparing it to the stage version, but then I realized that the majority of people who will be viewing the film have never seen the stage play. That being said, as a stand-alone film, August: Osage County can  almost put the mirror up too close the nature. At the same time, the family dynamic is actually believable which makes it a refreshing change from the cookie-cutter family movies out there. At the helm is the matriarch of the family, played by none other than the magnificent Meryl Streep. She’ll probably beat her own record again with Oscar nominations for this one. And, as a pleasant surprise, Julia Roberts gives a solid performance as Barbara Weston, a role for which Amy Morton garnered a Tony nomination. Roberts’ portrayal, as well as Streep’s are worthy of the SAG nominations they received. In the supporting cast, you have the likes of Margo Martindale, Chris Cooper, Misty Upham, Abigail Breslin, Julianne Nicholson, Bendedict Cumberbatch, Ewan McGregor, Dermot Mulroney, and Juliette Lewis.  Sam Shepard is the pivotal role as Beverly Weston. Each and every one of the cast members are great actors, so to see them all together in one film is a real treat. Taken out of the confines of the stage and put on location, the film still has the element of a frustrated and fractured family, sometimes more so because the characters are actually put into the elements of the Oklahoma county in which it takes place. Streep’s vocal and physical transformation is a far cry from the woman who danced and sang her way through Mamma Mia!  or took home the Oscar for playing one of England’s toughest women. There’s a weakness, fragility, and all out strength that Streep brings to Violet Weston that makes the film 1000 times better. In the hands of a lesser actress, it would just be another film about a dysfunctional family. The film opens on January 10th everywhere and needs to be seen for its sheer verisimilitude.