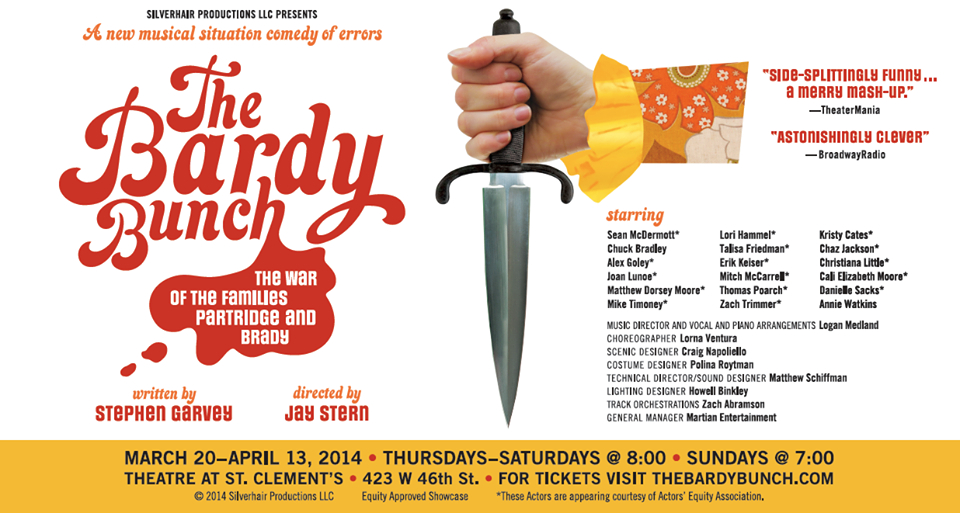 Picture it: Shakespeare, Partridge Family music, and Brady Bunch punchlines–in one show. That’s what happens in the musical,  The Bardy Bunch written by Stephen Garvey and directed by Jay Stern. Their tagline: In the summer of 1974, the Brady and Partridge Families, recently canceled by ABC and no longer under America’s watchful eye, met in a blood-soaked, passion-filled, vengeance-fueled, very special episode of Shakespearean proportions.

Boy, is it Shakespearean– and musical in the best way possible.  Writer Stephen Garvey has managed to take two of the most popular shows of 1970s, and the most popular playwright of all time, and make a seamless musical theater experience. Broadway vets Sean McDermott (Miss Saigon/Grease/Starlight Express) , Lori Hammel (Mamma Mia!), and Kristy Cates (Elphaba in Wicked) lead the Brady and Partridge kids in a mash-up of Shakespeare’s classics (Romeo & Juliet, Hamlet, and Macbeth, just to name a few) backed by groovy music like, “I Think I Love You” and “Sunshine Day” (complete with the best Brady bicycle sequence since the 1995 movie adaptation) and my personal favorite, “It’s One of Those Nights (Yes, Love.)” Young talents like Erik Keiser, Annie Watkins, Cali Elizabeth Moore, and Mitch McCarrell give stand-out performances. The show itself is so unique in concept and construct, that it must be seen and heard! Shakespeare would be proud. So, if you’re in the NYC area, groove on down to the Theatre at St. Clements for a serious nostalgia fix.

The Bardy Bunch enjoyed its original run during the 2011 New York International Fringe Festival and opened March 20th, 2014 Off-Broadway. For ticket information and to learn more about the show, visit: http://www.thebardybunch.com.

And on a personal note: Stephen, yes, I am a groupie.