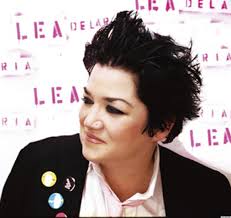 I was watching interviews featuring the cast of Orange is the New Black, after finishing the second season in its entirety and came across something interesting. Cast mates were complimenting each other’s singing skills, and Lea Delaria’s name came up. Delaria, who plays “Big Boo” on the show has been an actor, stand-up comic, actor, and acclaimed jazz singer for years. Jazz singer! So, that led me to research, because, as always, I love research. Holy moly, I did not realize that Delaria has been on Broadway: Twice. How cool is that? In most interviews with the OITNB cast, Uzo Aduba’s name has become synonymous with “Broadway vet.”

However, many actors, especially New York actors, have theater training and may even have some Broadway experience. Delaria has appeared in the 1998 revival of On the Town with Modern Family star, Jesse Tyler Ferguson, and in the 2000 revival of The Rocky Horror Picture Show as Dr. Scott and  Eddie.  Her jazz skills are quite amazing. Here’s a clip of her on the Rosie O’Donnell Show performing “I Can Cook Too” featuring Jesse Tyler Ferguson.

She’s active in the NYC jazz scene, and her website is pretty cool too. Fab voice Lea Delaria! You rock!

Bonus: She does an amazing jazz cover of “The Ballad of Sweeney Todd”

UPDATE: Lea Delaria herself tweeted me after reading my article:

@StephanieGould the the REAL Broadway vets on our show are Annie Golden and Beth Fowler. Compared to them I'm a late comer.