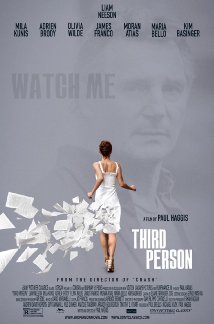 I’ve always admired directors. They told us in theater school that theater was an actor’s medium, but film–that’s a directors domain. As actors, we’re there to serve a purpose to the story, to the director–to do a job. Screened recently at the Tribeca Film Festival, and set for a June 20th limited USA release, I’m really eager to see this film. Starring Liam Neeson, Mila Kunis, James Franco, Olivia Wilde, Kim Basinger, Adrien Brody, and Maria Bello with Crash cast member Moran Atias, this ensemble cast intrigues me. Known for this screenwriting Oscar wins for Crash and Million Dollar Baby, I’ve admired Haggis as a writer/director. He does solid work.

Haggis’ new film, Third Person, tells the story of three couples in three different cities, all interlocking. It seems simple enough, but viewing the trailer, it also seems complex, but in the best sense of the word. The trailer itself has a film festival feel to it. I don’t know why, but I’ve always loved trailers; they are an art form in themselves. What’s even more interesting to me is the fact that Mila Kunis and James Franco can count this collaboration as their fourth film together–and they frequently play a couple. Also interesting is the fact that I haven’t really Kim Basinger in a while. I think the last was The Door in the Floor and 8 Mile.

Judging from the trailer, the film looks like it’s going to be reminiscent of Crash, but that’s not always a bad thing. I’m interested in seeing how the film is structured and plays out.