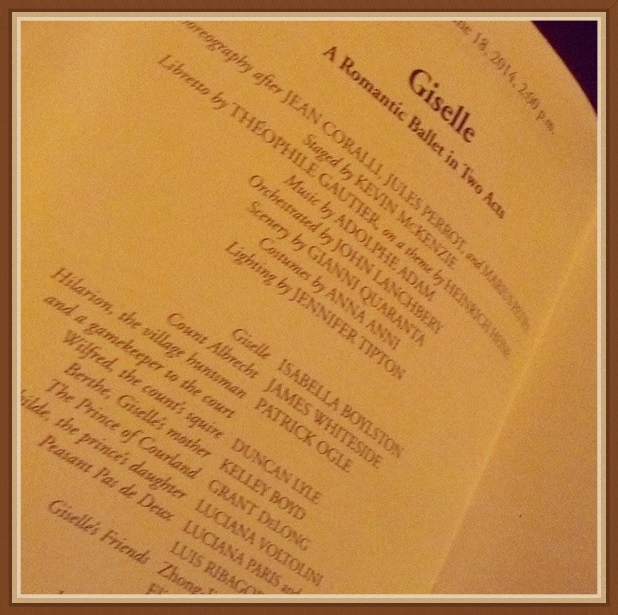 A Matinée is an afternoon performance. They’ve always been a favorite of mine as an actor.  Performing on two-show days can be exhausting, but well worth it in the end. Today, I went to a 2:00 p.m. performance of Giselle. That performance just so happened to mark the NY debut of ABT soloist, Isabella Boylston in the title role. The last time I was at The Met, I saw Diana Vishneva in Manon and sat in the Family Circle–the affordable seats. Although the view is high up, I was able to view everything with perfect clarity. For a ballet, it is actually beneficial to sit high up because it makes it easier to see every variation and formation. I actually saw details that those in the orchestra or balcony seats might miss.

Giselle is interesting. It’s the story of unrequited love, and a young peasant girl who dies from a broken heart. There is a specific part in Act 2 which was amazing to see from above. Act 2 deals with Albrecht’s mourning of Giselle and his encounter with the Willis, the ghosts of women  who died before their wedding day. They are lead by Myrtha, the Queen of the Willis, and Giselle becomes one of them. It was hauntingly beautiful to watch, and something I will never forget. Here is part of the Willis’ dance. It’s about 15 minutes long in its entirety, so here is just an exerpt from the Dutch National Ballet production:

The amount of grace and lightness that it takes to portray all of the characters in this show is quite difficult, but I thought that for a matinee,  with the cast that was performing, ABT did a fantastic job. Before I forget, there’s also the famous “Giselle Variation.” Pay attention to the footwork… it will amaze you. Here it is performed by ABT principal dancer, Gillian Murphy, with the Royal New Zealand Ballet:

Overall, I enjoyed my afternoon at the ballet. It was well worth the time. I am glad I finally got to see one of my favorite ballets live and in person. I’ll keep a lookout for Isabella Boylston. I wouldn’t be surprised if she is promoted to principal dancer soon.