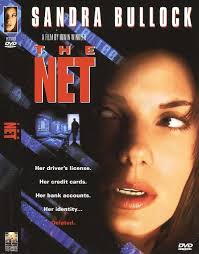 It’s been almost 20 years since Sandra Bullock starred in The Net (1995.) In the first 5 minutes of the movie, Sandy’s character manages to order pizza online, have a fake fireplace using her desktop, and have a weird, Siri-sounding cyber-date with someone she’s talking to in a chatroom. Now, we can still do all of those things–we order pizza from GrubHub, have a Yule log on our flatscreen TV, and sometimes awkward Skype-dates. There are a few things that have been extinct for years now though–floppy disks and dial-up connections. Oh, the floppy disks…so many floppy disks. Apparently, there are places online you can still buy them. Bullock plays Angela Bennett, a computer programmer who is sort of a hermit. But, when she goes on vacation, she meets Jack Devlin (played by Jeremy Northam in his American film debut.) Northam’s character is basically a super-sleaze set on taking her down because she go a hold of super-sensitive information. All I have to say about the Sandra Bullock/Jeremy Northam relationship is it’s basically a PSA for being careful who you talk to online. And then there’s the whole stolen identity thing. It all proves that some things never change.