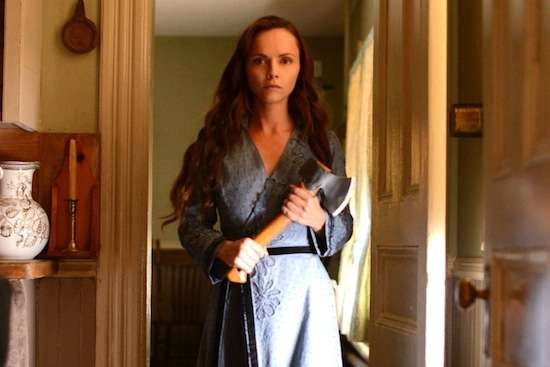 There’s a famous nursery rhyme about the legendary murder from August 4, 1892:

And gave her mother forty whacks

When she saw what she had done

She gave her father forty-one

In Fall River, Massachusetts in the summer of 1892, a crime was committed that became the basis for the modern day courtroom drama. Accused and later acquitted of the murder of her parents, Lizzie Borden’s name has become synonymous with folklore and a woman who got away with murder. There have been several film, even stage adaptations of the famous mystery and its seemingly innocent woman. Taking on the role of Lizzie Borden this time is Christina Ricci. Originally premiering on the Lifetime television network in January, 2014, Lizzie Borden Took an Ax has made its way to Netflix. Weirdly enough, I watched it yesterday, on August 4th, 122 years to the day, after the crime.

Things start off as strangely as the legend of the murder itself with a modern day soundtrack that continues throughout the film. I’ve never really been  a fan of period pieces using modern music, the recent adaptation of F. Scott Fitzgerald’s The Great Gatsby being the most recent big-screen culprit. I found it annoying when Marie Antoinette, and A Knight’s Tale did it, and it still bugs me now. That being said, the movie is rather decent, but sometimes drags at parts. Ricci did an acceptable job as Borden, but from an acting standpoint, I found some of her movements and facial expressions to be a bit too modern. Then again, given its use of modern music, it might have been a director/actor decision collaboratively. Some things just felt too forced. I found myself thinking about the set dressing and costumes more than the acting at some points. And, from an actor’s point of view, that’s not necessarily a good thing. Clea Duvall makes an appearance as Lizzie’s sister Emma, and Billy Campbell plays her lawyer, but neither get enough screen time. Christina Ricci has always been one of my favorite actresses. I grew up watching her movies; from Mermaids to The Addams Family to Now & Then and The Ice Storm, she’s always been one that I’ve wanted to watch.  This project is no different. Despite its slow goings and weird soundtrack, I’d give this retelling of the famous Borden case a watch.