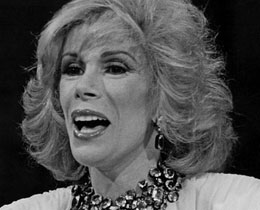 A lot of people know Joan Rivers as a commentator on the red carpet– a member of the “fashion police.” However, Ms. Rivers was more than just a woman who handed out compliments or witty remarks about a star’s outfit. She, like the late Phyllis Diller, was a pioneer for female stand-up comedians. She appeared on The Tonight Show, The Ed Sullivan Show, and many many more throughout her long career. She became one of the first female hosts of a late night program when she stepped in for Johnny Carson as a guest host. She was a writer, and lent her voice to The Electric Company, and eventually went on to host several of her own shows. She was amazing. Rest in Peace, Joan. Hope you’re having a good laugh with Johnny Carson and Ed Sullivan. You are an inspiration to all of us female comics out there.