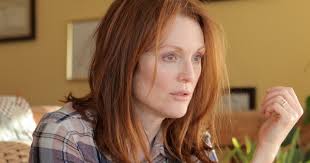 There are moments, as someone in the arts, in a creative field, where something like a movie becomes more than just your everyday movie, it’s an experience. Last night, I was fortunate enough to attend a screening for the SAG Awards of Julianne Moore’s new movie, Still Alice which was followed up by a Q&A with the star herself. At first, I was excited because I got to see a movie before its premiere (actually, on the same night, but I’ll explain that in a minute.) Then, I became really overwhelmed by the fact that one of my favorite actresses of all time was actually going to be there. Finally, after viewing the movie, I became thankful because of its ultimate and permanent existence in our culture.

When I was 14, my grandfather was diagnosed with Alzheimer’s. My family and I would take care of him during his final year of life, but it was difficult and extremely painful to watch such a vibrant, intelligent man slip away mentally. Granted, unlike Moore character of Alice (who has just turned 50 in the film) my grandfather was 80 years old. I remember having to remind my grandfather where he was, who people were, and so on. He even “ran away” one time because my family had taken his car away from him. Therefore, the only way for him to get anywhere was to walk. My mother found him on a sidewalk not far from our house. He had fallen, and slit his lip open quite badly. When he was asked what he was doing, he said he was going to Sunday Mass–it was a Thursday afternoon. My grandfather, like the millions of people dealing with this disease, had his good days and bad days. It was wonderful when he remembered things, but absolutely heartbreaking when he didn’t even remember my father, his own son. My grandfather would often mistakenly refer to my father as Walter. Walter was my grandfather’s brother. Despite the devastating affect it had on our family, looking back on it, that year really helped shape how I view people suffering from illnesses of the mind.

Dealing with the disease, whether it is Early-Onset, or in old age, challenges everyone connected with it. For the person who has it, life is difficult, but it’s also quite an uphill battle for family and friends as well. The film, based on the 2007 novel by Lisa Genova, rounds out its supporting cast with Alec Baldwin, Kristen Stewart, Kate Bosworth, and Hunter Parrish playing Alice’s devoted and emotionally fragile family.

The film unearthed memories I hadn’t thought about in years, and it broke my heart at points because I remember witnessing conversations that were very similar to those in the movie. What was even more tragic, was that this character was so young and dealing with this horrible disease.After the film ended, everyone was silent. You could hear people crying, and it was amazing to watch it with a group of people who were so deeply effected by the experience of the film, myself included. I don’t really think I can put into words just how important this film is. It’s not just about Julianne Moore’s performance, but reality of the film.

On a side note, Julianne Moore had come from the New York premiere of Still Alice and was dressed quite formally. The funny thing was, she acknowledged that fact and laughed it off. She was absolutely wonderful and enjoyed our feedback and support of the film. She’s awesome.