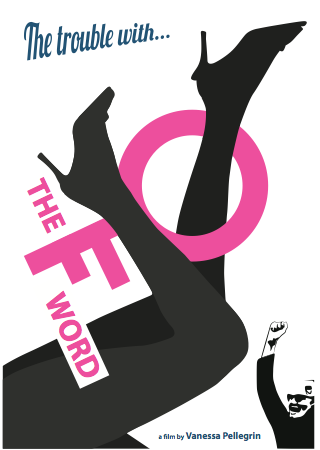 When you talk to director Vanessa Pellegrin for the first time, one of the first things that becomes apparent is her combination of passion and intellect; especially when it comes to activism, specifically feminism and equality. These qualities have served the young documentary filmmaker well during production for a new project entitled, The Trouble with the F Word. Over the course of our conversation, it became clear that we shared a similar perspective on the issue of equality in general.

Born in France, and raised primarily in Morocco, Pellegrin brings a unique viewpoint to the issue of feminism. She initially began her career as a journalist, specializing in investigative reporting, current affairs and sociological issues in Morocco (which is a very male-dominated society.) This led to an interest in film production, bringing her from Morocco to Spain and then finally settling in her current home of London. She believes that communications between the sexes are lacking and that there needs to be more of an open discussion about issues facing gender equality in the modern age. As Pellegrin puts it, she wants to “take the temperature” of the current state of equality on an international level.

In 2013, with the hundred-year anniversary of British suffragette  Emily Davison, Vanessa became inspired to explore how far women have come (or not) in terms of suffrage. She decided to document British activist Lucy-Anne Holmes, famous for the “No More Page 3” campaign and television host/actor Nick Lancaster as they explore contrasting views of feminism and equality in today’s modern culture. Actress, Emma Watson’s September, 2014 speech at the UN has only furthered the interest in this hot-button topic.

Faced with opposition from various political activist groups, including a Men’s Rights group, the film sets out to explore what problems women face globally by having two people from opposite ends of the spectrum swap viewpoints and investigate the other side for themselves. How far has women’s rights and equality really come? What issues do women in other countries face?  Pellegrin wants to bring a thought-provoking film to the masses in an era where women are still fighting for their voices to be heard.

Vanessa hopes to gain the remainder of the film’s funding from a Kickstarter campaign and release the film at the end of this year. For more information and updates on this thought-provoking film, follow them on Twitter: @FwordFilm

Side-note: Vanessa has one of the most interesting accents I have ever heard in my life, and I could literally listen to her talk all day long. It was a pleasure to meet someone with such passion for a particular subject matter.